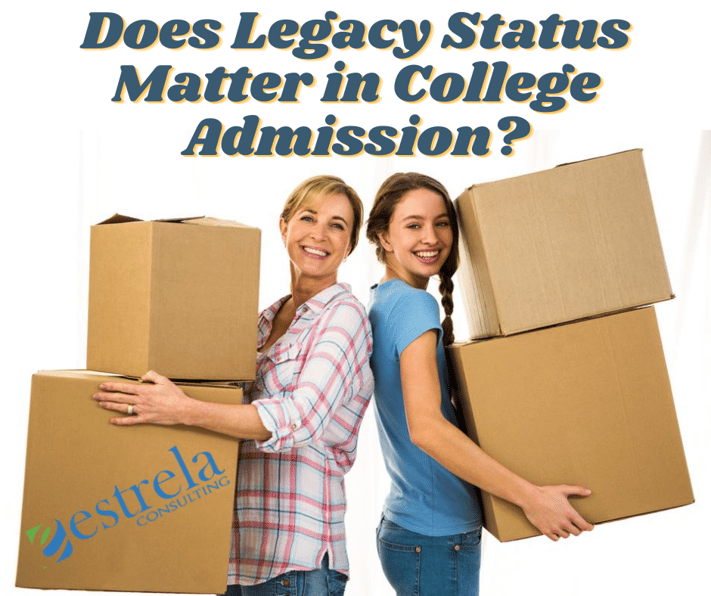 Oh, legacy admission, you sneaky little detail. How is it that you manage to make so many happy while others loathe the idea of you? The mere thought of your impact has alumni counting down the years, months and days until they can exclaim alongside their children “WE got in!”

But is it really that easy? Is the application process a mere formality for those whose bloodline includes graduates of a particular institution? Or is “legacy status” simply a category used when buildings and recreation centers are emblazoned with the family name? Can an otherwise under-qualified student get a “bump” in the admission review just for being the child or grandchild of a graduate?

The answer: it depends.

At some colleges, your opportunities for admission go up significantly as a legacy applicant. In fact, Georgetown stats show that legacy students are twice as likely to be offered admission than those who don't have a familial tie to the institution. On the other end of the spectrum, Johns Hopkins University chose to eliminate legacy admission because - as described by JHU President Ronald J. Daniels - it was "impairing our ability to educate qualified and promising students from all backgrounds and to help launch them up the social ladder."

The reality is that each college will determine the policy that is best for their institutional priorities. Overwhelmingly colleges are quick to share that, even if legacy status plays a role in the review process, students need to meet other standard admission criteria.

“We honor a family’s commitment to the college and it is certainly a beneficial factor in our holistic review,” says Megan Starling, Interim Director of Admission at Rhodes College. “However, a student must have demonstrated the ability to succeed here to be admitted regardless of family connections. It would be a disservice to the whole family to admit a student who isn’t an academic fit. In the case that a student is not admitted to Rhodes, our alumni office personally notifies the family in advance.”

Regardless of how heavily legacy status is weighed (if at all) in the admission process, it’s important for students to remember that it’s their responsibility to let the admission office know that they have some sort of legacy ties to the institution.

“We love to recognize our alumni but oftentimes we don't know if a student is a legacy student unless they list the parent/grandparent on his or her application,” says Laren Wenzell, Associate Director of Admission at Ohio Wesleyan University. “It’s very important that students list it on the application or to mention it in their interview.”

Additionally, legacy students should keep in mind that, while they may have an additional “look” in the application review, it's important that the college knows they have a genuine desire to attend the school.

“We practice demonstrated interest in our admission review so a student who hasn’t visited or been engaged in their search of Rhodes is unlikely to be admitted. This applies to legacy applicants as well,” says Starling. “A student shouldn’t take for granted that because mom or dad attended here, they don't need to visit or reach out to the admission counselor. A visit to campus for Homecoming when the applicant was 7 doesn’t count as demonstrated interest.”

Now, the questions is: can this same set of standards regarding the role of legacy status in admission also be applied to the most selective schools in the country? We did some digging to uncover promoted policies of a few well-known institutions, and here’s what we found…

Schools Where Your Family Name Matters

An article in the Stanford Alumni Magazine shared this information about how legacy students are reviewed by the admission office:

One of Stanford's biggest priorities, as it is at most universities, is the bond of legacy. The percentage of alumni children admitted to Stanford is roughly three times the overall percentage of acceptance: somewhere in the mid to high teens. Nevertheless, there are many more 'no's' than 'yesses' each year. It is, says Stanford Alumni Association President Howard Wolf, '80, "the point at which the University is most vulnerable in its relationship with its alumni."

That being said, Stanford’s Dean of Admission, Richard Shaw stresses in this piece that, while legacy applicants are given this special consideration, it “is only relevant if the student is competitive in all other aspects.”

According to information on the Duke Alumni Association website:

We provide a supporting voice for all alumni children and grandchildren who apply for undergraduate admission. This is part of the service we provide to all alumni families and does not need to be requested by the family. While DAA does not directly review applications or make admissions decisions, we do provide information and guidance to applicants and their families throughout the admissions process.

Duke conducts a holistic assessment of all candidates for admission. While alumni affiliation by no means ensures acceptance to Duke, the university values meaningful connection to Duke and its traditions and does note alumni status when reviewing applications.

They include this “disclaimer”, as well:

While alumni affiliation by no means ensures acceptance to Duke, the university values meaningful connection to Duke and its traditions and does note alumni status when reviewing applications.

The folks at Emory clearly lay out on their alumni website the process that a legacy application goes through:

The undergraduate admission office values the legacy connections of applicants and encourages students to detail their university ties accurately on their applications. The admission staff and Office of Alumni Engagement work closely to document legacy applicants through the admission-review process. During the initial application review, an applicant's legacy status is noted on the review sheet and admission evaluators are instructed to consider the affiliation.

An interesting thing to note is the separate committee that Emory has to review legacy applicants:

In addition, during the committee-review process, there is a separate committee that does an additional review of legacy applicants. Finally, the deans of admission for Emory College and Oxford College closely monitor legacy decisions throughout the entire process.

Finally, they do include this disclaimer, as well:

A legacy connection is considered as part of a student’s application, but it is no way a guarantee of admission in the highly selective pool of applicants.

Schools Where You’re Admitted Solely on Your Own Merit

A few years ago on the MIT Admissions Blog, Assistant Director of Admission (and MIT Grad) Chris Peterson wanted to set the record straight on their policy regarding legacy in admission. We think he made his point pretty clear.

Selective college admissions is a zero sum game: every applicant admitted takes a space which could have gone to another student. Preferring a student whose parents attended a college not only takes away a spot from an equal or better student, it specifically takes away a spot from an equal or better student who overcame more by not having the advantages accrued by prior generations. And I can tell you, from having sat on countless committees, that we simply don't care if your parents (or aunt, or grandfather, or third cousin) went to MIT. In fact, one of the things most likely to elicit a gigantic facepalm is when a student namedrops some incredibly attenuated connection because they think it is going to help them get into MIT. There is only one way into (and out of) MIT, and that's the hard way. The people here value that.

While some schools may ask if you have a legacy tie to the school, not all of them use this to give students an advantage in the review. CalTech, for example, says this on their website:

The application asks if you have any relatives who have attended and/or worked for Caltech. We do not use this information for evaluative purposes, and we do not give preferential treatment to applicants based on this information. Caltech does not consider or track a student's legacy with the Institute, nor do we track or consider a student's connection to prospective or current donors.

So there you have it, folks. It appears that at many institutions legacy can play a significant role in an application review. It is important for families to recognize the one caveat that many of the schools noted above: a student should have the academic qualifications that a college is looking for in their applicants. That being said, the one piece that isn’t so clear is to what extent a family’s category on the “Honor Roll of Donors” plays in the process...we’re guessing it’s a pretty big role at some institutions.