Imposters Among Us in the College Application Process 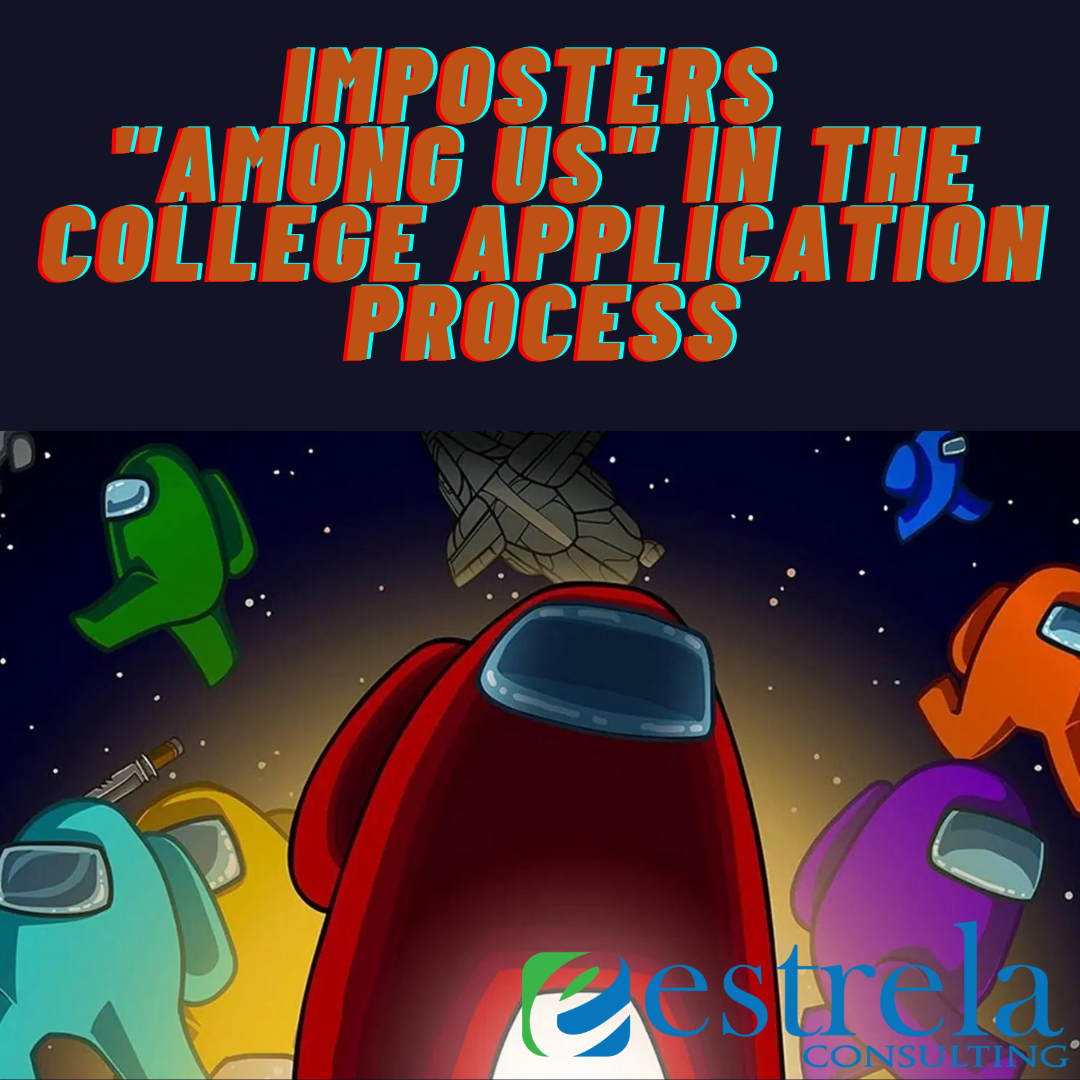 Join your crewmates in a multiplayer game of teamwork and betrayal!

I recently received a request from my kids to download the game “Among Us” on their iPads. As we do with all of these requests, I checked out what this game was all about before giving the go-ahead. Reading the succinct description above, and being in the thick of college admission season with my students, I immediately thought it sounded eerily like what high school seniors are going through right now. Not seeing it? Hang with me while I explain.

The premise of Among Us is this: a spaceship filled with "crewmates" completing tasks is infiltrated by an “imposter” who is posing as one of them in order to win the game. This imposter will sabotage the others, sneak through vents to gain access to areas of the ship, and will weave a trail of deception (and some death..but I’ll leave that part out) in order to achieve their goal. AKA (for the purpose of this blog): College Admission.

I know you’re probably thinking “This is a pretty intense analogy you’re throwing at us here.” Well, you’re right, but let me show you the correlations:

During this game the crewmates (i.e. ETHICAL APPLICANTS) are working on tasks that could ultimately help them get their spaceship to its home base (i.e. COLLEGE). These tasks include things like completing memory games (STANDARDIZED TESTING), working on files to send to the administration of the ship (COMMON APP), and a “med scan” that assesses their overall value to the team (INTERVIEWS).

When the crewmates discover that there is an imposter among them they call meetings (i.e. socially-distanced lunchroom conversations) to discuss who it might be so they can stop them. Meanwhile, the imposter is doing all they can so their true identity isn’t revealed such as shapeshifting to look and act just like the crewmates. They engage in the act of “venting” which allows them to gain quick and painless access to areas much more easily than for the crewmates, never having to navigate entry through closed or locked doors.

Now, you’re probably at the point where you’re wondering: who is this imposter and what role do they play in this college admission analogy? Again, just humor me here.

Thinking back to 2019 you may recall the “Varsity Blues” scandal and the shenanigans of one Aunt Becky and a former desperate housewife. These women, along with many other parents, decided that their kids wouldn’t be capable of traversing the college application process successfully in an ethical and honest way. Their belief was that their children would not earn admission to some of the most selective colleges in the country on their own merits. They decided at that point to take things into their own hands and...drumroll...become the IMPOSTER. They tried to blend in with the innocent crewmates, didn’t complete the many tasks the others were challenged to do, and they vented their way with ease through the otherwise impenetrable doors.

That is, until everyone realized this imposter wasn’t who they had seemed to be.

So, what does last year’s admission scandal and this crazy game have to do with students applying today? Lots, actually. While it would be great to think that those involved in Varsity Blues were the first and last bad players in the admission game, that’s just not the case. There are still plenty of imposters out there who believe that the only way to navigate the college application process is by trying to be someone they are not. From parents who choose to pen college essays because their child’s true voice just won’t be impressive enough, to those who use their connections to find any vent possible in which to unethically pass by the standard doors of admission, this process is filled with imposters. As well-meaning as those adults supporting students through this process might be, the reality is that those on the admission side of the desk can usually tell when an application is the work of an imposter vs. an actual crewmate. However, as more and more imposters show up in the game (apparently there can be several in Among Us), the more challenging it is for application readers to know who is and isn’t shapeshifting and who is working through their assigned tasks as best as they can.

So, if you’ve read this far and you’re still working through the stream of analogies above, let me give you this summary from my 10-year-old daughter: “The imposters should just keep out and let the crewmates complete their tasks so they can win the game without anyone sabotaging them.” Enough said.

Older Post Jasmine's Take: A Look at College During COVID-19
Newer Post How These Colleges are Changing Lives and Why They Should Be On Your List